The publisher at The ExpressTimes, a daily newspaper in on the Pennsylvania / New Jersey border, made a decision that had far reaching impact on local funeral directors. This new service offering relied on creating a self-service Web portal that users would utilize for placing time sensitive paid obituaries with ease and effectiveness.

Based on the confidence in Bluefin Place Ad for classified self-service ad placement, a purpose built Funeral Directors' Web Portal was launched, and immediately improved and enhanced the newspaper's obituary listings workflow. 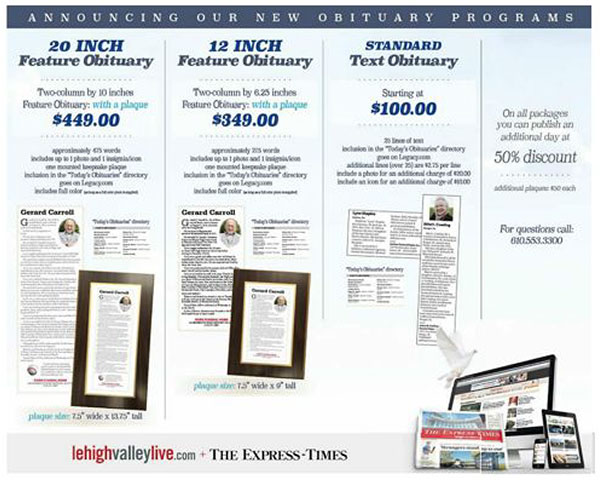 What is unique about the deployment is that the publisher REQUIRED all funeral homes to use the portal for obit submission, and would no longer take submissions via the phone room or email.

This was a decision that was not taken lightly. The obit category remains one of the strongest sources of classified advertising revenue. In order to make this work, the web portal had to be “bulletproof,” so that user will embrace the new process that puts the entire obit creation and booking workflow in the hands of the funeral homes.

The Express-Times saw an opportunity to change the paradigm on how obits were created, booked, and managed by offering:

Steps to Launch: The team knew that there was no second chance to make this work. The newspaper and Bluefin put a lot of effort in planning the deployment of the Funeral Directors Portal so that the users were effectively “sold” on the solution.

Results: The Funeral Directors Web Portal has been in use for over three years, and is seen as an unqualified success for both the newspaper and the funeral directors. The funeral directors are enjoying later deadlines, and immediate feedback, confidently knowing their obit is filed and ready for publishing both in online and print.

With the online proofs, funeral directors can seen exactly how the obit will appear in the paper, and even share listing with the bereaved family, which enhances their service offering. > Bottom Line The publisher has seen both a solid increase in total category revenue and gross profit, along with increased average price per obit listing sold.

Conclusion: The Express-Times and Bluefin Technology Partners were able to change the obit creation process so that everyone wins! The new workflow has been received as an a positive upgrade for both publisher and funeral directors. Here, technology and collaboration from all parties has helped deliver a solution that has exceeded all expectations.